PJCMT is a charitable organization is named after a renowned social activist Late. Panchanan Jena, who fought for the cause and concern of down trodden and neglected populace in the sub urban localities of KESORA and JHARAPARA . His relentless effort for the upliftment of the clusters of villagers near KESORA and JHARAPARA made him the prince of that localities and the subsequent development of habitants in the form of education, health care and socio care. It is in his memory the trust-Panchanan Jena Memorial Trust (PJCMT) was formed. Since its inception in the year 2003. It is working consistently to see his unfinished dreams are reflected in multiple ways for the well being of the common man. In its educational programme in the year 2004-Panchanan Jena College was established that runs +2 Science, Commerce and Arts (Residential College). In the Year 2005 RCBEM was established which later on changed to PJ college of Management for BCA and BBA to impart BBA and BCA Education in Affiliation with Utkal University that is running successfully for last four year under the same trust. Later days MBA and MCA programme was started and now running successfully.The charitable organization is now all set to spread its wings in the state of Orissa to ensure education for all and justice for all and health care for all. 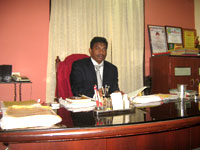 The world is changing fast and India, our motherland is changing keeping pace with the rapid flux at times she goes ahead of the developed countries. All these happen due to our human resources. PJCMT leaves no stone un-turned to move forward to get to the top. We have put up quality infrastructure to enable our techies to perform the best. Our faculty members make relentless efforts to keep themselves abreast of the advancement in the fields of science and technology. A library in the name of Late Panchanan Jena was inaugurated on 24th January, 2019 at Jharpada High School. This is for the information of all the students and faculty members that Feedback facility is available in the AICTE Web Portal.